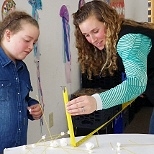 Parks & Recreation Director
Jessica Booth
Jess came to us at the end of 2012 following her experience as an administrative assistant for Stowe Parks & Recreation. Born and raised in Vermont, Jessica has enjoyed recreation since she was a kid and has been working in the field since high school. With a degree in Elementary Education from Castleton, her creativity and experience provide a great foundation for the implementation of family activities in Newport. Jessica handles most of the programming for the department including school vacation, summer camps and annual events. Currently Jessica lives in Irasburg with her husband and one year old son, and enjoys skiing, kayaking and gardening. Jessica also coaches field hockey at North Country High School.

Parks Supervisor
Andrew Cappello
Andy came to Newport from Central Vermont following his girlfriend (now wife) to the Northeast Kingdom. He began his career in high school as a Parks & Recreation camp counselor and has since fostered a passion for Parks & Rec through his education, training and years of experience. Most of Andy's time is spent at Prouty Beach Campground and the Newport City Dock. When he's not in one of Newport's beautiful parks, Andy is with his family hiking mountains, paddling lakes and rivers, skiing or enjoying the endless Vermont beauty.

Parks Foreman
Douglas "Mac" McKenny
Mac has spent his whole life in Northern Vermont and loves to play in any of the four seasons. Whether it's fishing, hiking, skiing, golf or soccer, the outdoors suits him well. As Newport's Park Foreman, his duties cover a large spectrum of projects from prepping baseball fields, grounds keeping, making ice on the skating rink and sometimes even constructing ice castles. Outside work, Mac coaches varsity boys soccer with his brother and loves exploring the beauty of the Northeast Kingdom with his two sons Drew and Abram.